Speaking on the Core Research Cluster of Disaster Science Planning Session, Tremewan stressed that humankind has crossed many thresholds of irreversible climate change, and that the Asia-Pacific Region is bearing the brunt of the severity and unpredictability of natural disasters.

“The Great East Japan Earthquake was a call to action, which we respond to by promoting the implementation of interdisciplinary and collaborative DRR research and informing policymaking in the region,” Tremewan said.

“With the leadership of Tohoku University, we established the APRU Multi Hazards Program Hub at IRIDeS [International Research Institute of Disaster Science] to fill the gap in research infrastructure for collaboration across the Pacific,” he added.

The World Bosai Forum was established in the aftermath of the Great East Japan Earthquake and Tsunami in 2011. It proposes solutions to enable DRR in Japan and overseas and aims to promote the implementation of the Sendai Framework for DRR 2015-2030. 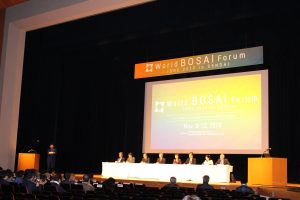 This year’s forum impressed with a very powerful pre-opening ceremony featuring a personal story from high school students from Miyagi and Kobe who have overcome disaster and are taking leadership toward recovery. Keynote speeches from researchers, government officials, as well as representatives of key organisations, such as the World Bank engage in a circle of exchange on handing down the traditions of disaster preparedness to generations to come.

Tremewan took the opportunity to highlight also APRU’s new collaboration between UCLA and Tohoku University on Architecture and Urban Design for Disaster Risk Reduction and Resilience, which will draw on the APRU network to bring together design labs and scientists focused on disaster risks.

“This multi-year initiative will effectively integrate research, practice, and design by creating an international platform for production and exchange of knowledge on the environmental design that reduces the risk of recurring disasters and enhances resilience,” Tremewan said.

“The way that we have worked together to build an active community of experts, which is contributing so much to the Asia-Pacific region, makes me very optimistic about the future of APRU’s work in this area,” he added.