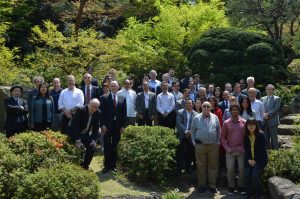 The 2nd APRU Digital Economy Business Offsite took place on April 11 – 12 2016 at the International House of Japan in downtown Tokyo. The event was attended by over 50 academic, business, government and civil society leaders in the Asia Pacific region, and was hosted and organized by Keio University in cooperation with the Asia Pacific Institute for the Digital Economy (APIDE).

The theme of the 2016 Offsite was the recently signed Trans-Pacific Partnership (TPP) Agreement. Panel sessions taking place over a day and half, conducted under Chatham House rules, were divided into six sessions. Discussions focused on whether the provisions of this currently still controversial trade agreement (now embracing 12 nations in the region and over 40 percent of global trade) amounts to “a new Digital Economic agenda” for the Asia Pacific region.

The conclusion from these discussions was that TPP is the first trade agreement to reflect the many transformations engendered by the Digital Economy. TPP is innovative from a trade perspective, because it brings together new disciplines in areas vital to the success of the Digital Economy, such as privacy, cross-border data flows, e-commerce, cyber security and competition in cyber space. On the other hand, TPP’s image has been damaged by the secrecy and non-transparency of its negotiation. Successful ratification and implementation will require efforts to build trust beyond traditional trade communities.

It was highlighted that APRU universities have a key role to play in this process through engaging relevant stakeholders and offering research and analysis on controversial provisions within TPP in relation to intellectual property, data localization, net neutrality and dispute settlement. Capacity-building and education are seen as key parts of this outreach process.