The Future of the Pacific and its Societies was the focus of the annual meeting of the presidents of the Association of Pacific Rim Universities at UNSW Sydney, 25-27 June, 2017. The meeting began with a briefing on the state of the Pacific Ocean and the implications for social equality and sustainability. Leading scientists and international policy leaders were invited to brief the presidents and senior international leaders on these emerging challenges and the actionable steps for universities. Over the three-day meeting, member universities agreed to address the science and policy challenges collectively to ensure the long-term well-being of one of the world’s most important resources. 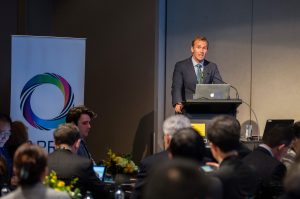 The 21st Annual Presidents’ Meeting (APM) was welcomed by the Hon Rob Stokes MP, NSW Minister for Education, Chancellor Gene Block, UCLA and APRU Chair, and the host, Vice-Chancellor Ian Jacobs, UNSW Sydney. All three speakers emphasized the importance of APRU as the only network connecting the leading universities in Asia, the Americas and Australasia and its role in the international policy arena. 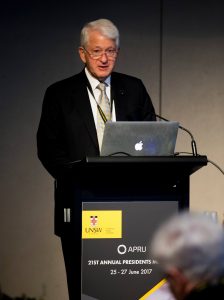 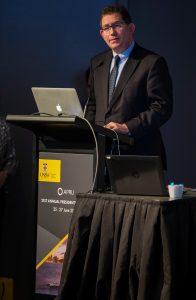 “Over the past few years, APRU has played a more active role as an international organization, engaging with other multilateral organizations such as APEC and the UN, also partnering with business and community organizations on common objectives. This has given our members more visibility and more pathways to making a contribution in the international policy community”, said APRU Chair Chancellor Block. 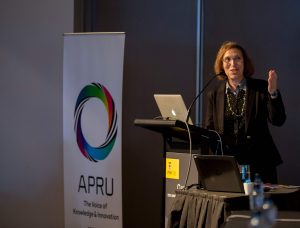 Professor Lisa Levin, Scripps Institution of Oceanography, UC San Diego, spoke about the ’deep ocean’ and what is happening to this huge area we know so little about.. She showed the effects of ocean warming and the speed of the changes which constitute a threat to ocean sustainability and human reliance on marine life.  She held out the promise and importance of collective action including interdisciplinary research and education, environmental management and stewardship.She also emphasized how universities could reinforce different UN efforts, help policymakers promote carbon dioxide emission reduction, and create “a next generation that knows and cares about the ocean”.Professor Levin also applauded APRU’s voluntary commitment to SDG 14– raising awareness and addressing major challenges affecting the health of the Pacific Ocean and its marine and coastal resources. The development of the APRU Oceans Program would be one the key objectives at the upcoming Senior International Leaders’ Meeting, to be held in Monterrey, Mexico in September 2017.Dr Yoshitaka Ota, Director (Policy), Nippon Foundation-UBC Nereus Program, The University of British Columbia and Professor Jane McAdam, UNSW Sydney, also spoke about climate change and social equity and Pacific Ocean disasters and displacement in societies respectively. 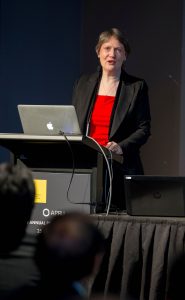 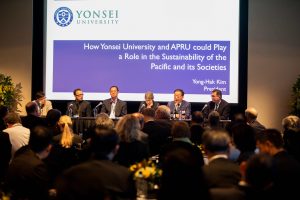 Presidential Panel on Sustainability and Research Universities in the Asia-Pacific

At the keynote speech delivered to the APRU university leaders, the Rt Hon Helen Clark, former Prime Minister of New Zealand and the former Administrator of UNDP addressed “how universities can help drive progress on the UN’s SDGs.”She noted that the Asia-Pacific is known for its economic dynamism and the phenomenal rise of people out of poverty, yet concurrent with rising income inequality and the “grow now, clean up later” approach to development. As a result, the focus on SDG 10 on significantly reducing inequalities and the three environment SDGs, on climate change (SDG 13) and on ocean (SDG 14) and land based ecosystems (SDG 15), are equally important to Asia-Pacific communities.Ms Clark further stated that universities could make progress on other the SDGs by focusing on SDG 4 (education), through cross-disciplinary research to meet the complex and interlinked goals, through support for evidence-based policy making, and through advocacy, as “universities have high status in society, and their voices are listened to.”

Future of International Relations in the Asia-Pacific 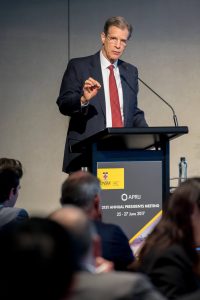 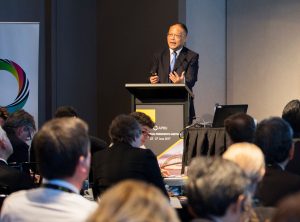 Professor William Overholt, Harvard University, and Professor Zhu Feng, Nanjing University, addressed the geopolitical challenges faced by the US and China in the region. They covered the policies of the Trump Administration and the impact of China’s Belt and Road Initiative. Professor Tessa Morris-Suzuki, Australian National University, also provided an expert analysis on the strategic shifts needed in responding to the new international environment.

APRU: The Voice of Knowledge and Innovation 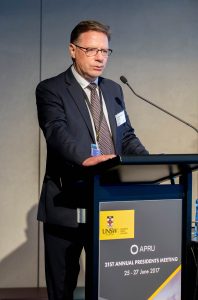 In his report to the meeting, Dr Christopher Tremewan, Secretary General, spoke about APRU’s role as the voice of knowledge and innovation in the region, bringing together thought leaders, researchers, and policy-makers to exchange ideas and collaborate on effective solutions to the challenges of the 21st century.Dr Tremewan also highlighted APRU’s deep engagement with the work of APEC, in science and technology policy, human resources development, education strategies, and labour mobility and employment.

He also drew attention to the inaugural APEC University Leaders’ Forum, to be held alongside the CEO Summit & APEC Leaders’ Meeting in Da Nang, Viet Nam, November 8-10, providing presidents with the opportunity to interact with the leaders of the APEC economies. 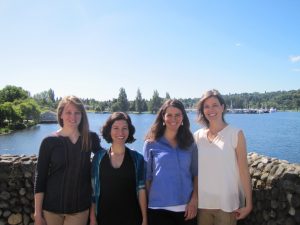 The winners of the APRU-NYT competition. (L-R) Hillary Scannell, Eleni Petrou, Leah Johnson and Katherine Crosman, The University of Washington

The winners of the APRU-New York Times Asia-Pacific Case Competition were also announced. Chancellor Block presented certificates to the presidents of the universities of the winning teams: The University of Washington (overall winner) and the National University of Singapore. 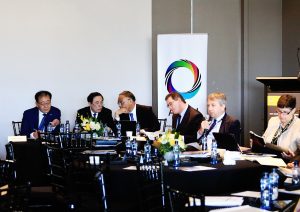 APRU Presidents at their retreat

Presidents met separately during the afternoon to share their insights and discuss some key issues: Opportunities for APRU International Leadership; New structures for Inter-disciplinary Education and Research; and Collaboration in Teaching and Learning among APRU members. 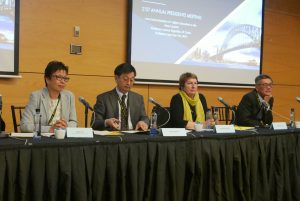 Senior international leaders of APRU members discussed the future strategy of APRU and how the network could help respective universities’ internationalization efforts. Key themes included addressing global challenges such as the sustainability of the Pacific Ocean, working closely with international organizations such as APEC and the UN, businesses and other stakeholders to influence policy-making, and raising awareness on particular issues and enacting change in societies. The senior international leaders felt that the forum strongly supported APRU’s strategy of impact and advocacy. 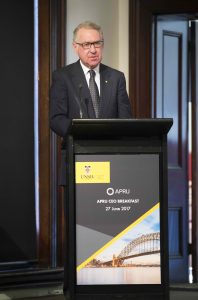 The meeting concluded with the UNSW CEO Breakfast session at the historic Customs House. Presidents and delegates had the opportunity to mingle with local business leaders, diplomats and the media. 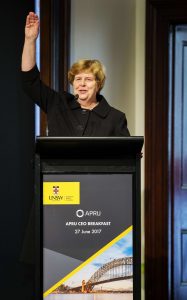 Professor Christina Romer, UC Berkeley and former Chair of the Council of Economic Advisers in the Obama administration, delivered a keynote on “The Future of Trade in Asia-Pacific after TPP”. This was followed by a panel discussion, comprising Chancellor David Gonski AC, Associate Professor Elizabeth Thurbon, and Professor Richard Holden from UNSW Sydney and Natalie Cope, CEO, Australia China Business Council. A lively discussion ensued with questions from the audience. 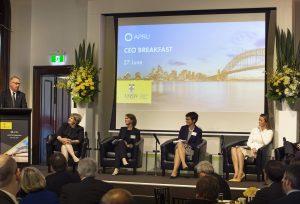 Panel at the CEO Breakfast session

Panel at the CEO Breakfast sessionBusiness Meeting
The annual meeting concluded with the annual business session where presidents deliberate on the internal business of the organization.  The APRU Chair, Chancellor Gene Block, UCLA, reported that the Steering Committee had decided to add a few more members and also that the Committee strongly supported the initiative to hold an APEC University Leaders’ Forum in Danang, Vietnam, November 8-10, 2017.The following were elected to a two-year term on Steering Committee:

The Director presented a financial report, noting the extra cost of the transfer of the International Secretariat from Singapore to Hong Kong. He also noted the savings that had been made by the administration in travel and office costs. 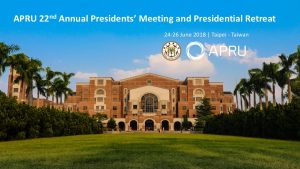 President Pan-Chyr Yang, National Taiwan University, who will host the next annual meeting, gave a presentation to welcome presidents in June, 2018.(Photos courtesy of UNSW Sydney)