Registration: By Invitation Only

In this virtual event, women president and vice president speakers will provide participants of the APWiL Mentoring Program with an opportunity to hear from women in senior leadership positions within APRU member universities. Speakers will share their personal story from accomplishments to opportunities and challenges throughout their professional career. A moderated conversation will follow where speakers will respond to questions submitted by attendees in advance of the workshop. If time permits, a Q&A period will follow.

Carol Christ is the 11th Chancellor and the former Executive Vice Chancellor and Provost of the University of California, Berkeley. She previously served as President of Smith College from 2002 to 2013, and before that was a professor of English and an administrator at Berkeley for more than three decades. Chancellor Christ is an advocate for quality, accessible public higher education, a proponent of the value of a broad education in the liberal arts and sciences, and a champion of women’s issues and diversity on college campuses. Since her return to Berkeley, she has worked to foster community and improve the campus climate, strengthen Berkeley’s financial position, address the campus’ housing shortage, and celebrate the institution’s longstanding commitment to free speech. 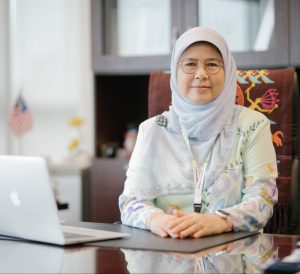 Professor Dr. Kamila Ghazali is the Deputy Vice-Chancellor (Academic and International) at Universiti Malaya. In this current position, she is looking into changing the academic landscape of UM to provide students with a more broad based flexible education. She has more than 20 years’ experience holding positions in various capacities at the university, national and international levels. She was previously the Associate Vice-Chancellor (International) at the university, Director of International and Corporate Relations (ICR), Deputy Dean at the Institute of Graduate Studies, Chief Quality Auditor of UM, and Deputy Dean at the Faculty of Languages and Linguistics. She is on various editorial boards of journals and international advisory committees. She is also the Chairman of the ASEAN University Network-Disability and Public Policy thematic network (AUN-DPPnet), a program that is fully funded by the Nippon Foundation, Japan. Nancy Ip is currently the Vice-President for Research and Development, The Morningside Professor of Life Science, and the Director of the State Key Laboratory of Molecular Neuroscience at The Hong Kong University of Science and Technology (HKUST). She received her PhD degree in Pharmacology from Harvard University, after which she held the position of Senior Staff Scientist at Regeneron Pharmaceuticals Inc. in New York. Since joining HKUST in 1993, she has served as the Dean of Science, Director of the Biotechnology Research Institute, and Head of the Department of Biochemistry. Cindy Fan is UCLA’s Vice Provost for International Studies and Global Engagement, and is the first woman and Asian American to hold that position.  She is also Professor of Geography, and formerly Associate Dean of Social Sciences and Chair of the Asian American Studies Department. As senior international officer (SIO), she manages UCLA’s international partnerships and agreements, represents UCLA globally, and oversees the 27 interdisciplinary research centers and eight degree programs within the International Institute. At APRU, she was Co-Chair of the International Policy Advisory Committee (IPAC) from 2016 to 2019.

Dr. Fan received her PhD from the Ohio State University and an Honorary Doctor of Laws from the University of Bristol.  She has numerous publications on migration, regional development and gender in China, including the pioneering book China on the Move.  Dr. Fan has delivered keynotes in the U.S., Europe, Asia, Australia and Africa, and has received the UCLA Distinguished Teaching Award, Distinguished Scholar Awards from the American Association of Geographers, an American Council on Education Fellowship, and grants from the Mellon Foundation, Henry Luce Foundation and National Science Foundation.