University campuses have become more diverse in an age of migration and student, researcher and faculty mobility. But increasing the numbers of unrepresented groups is not enough: university leaders must break down barriers to ensure all feel included, a conference of Pacific Rim university leaders heard in June.

“The value of inclusion is not just because we want to be kind and nice and warm, though those are important things. But inclusion and social belonging leads people to perform to their highest capacity,” said Jerry Kang, vice-chancellor for equity, diversity and inclusion at the University of California, Los Angeles (UCLA) in the United States.

UCLA hosted the 23-25 June conference of the Association of Pacific Rim Universities (APRU) on the theme of ‘Universities in an Age of Global Migrations’.

Evidence “suggests that people make much better human capital decisions and deal with constructive feedback much better when they are in an environment where they feel that they belong instead of feeling they are at the margins and about to be pushed out”, Kang told the conference, which included university vice-chancellors and presidents from more than two dozen universities in Asia and the Pacific, North America, Latin America and China.

The UCLA Office of Equity, Diversity and Inclusion is unusual in the United States, not least because its vice-chancellor reports directly to the UCLA chancellor, the executive head of the university.

The campus environment matters. Kang cited a study by social psychologist Margaret Shih, associate vice-chancellor in UCLA’s Office of Equity, Diversity and Inclusion, that showed that with a group of test-takers “if you primed their identity as Asian-Americans subtly, they do well in the math test and worse in the verbal test. If you prime their identity subtly as women, they do poorly in the math test and better in their verbal test”.

The job of university leadership is to ensure “all rise to their highest capacity and part of that requires us to be sensitive to the environment, and then to ensure a critical mass of people within that social identity,” Kang said, adding that one or two people from a particular group was not enough to ensure diversity. “There needs to be a critical mass.”

“We know that institutions in which there is a diverse student voice are stronger institutions, and make their decisions more flexibly, and are more able to respond,” said Michael Spence, vice-chancellor of the University of Sydney, Australia, during a panel discussion among university presidents.

“We know there is a core intellectual skill set that we value that is sharpened by diversity. But the challenges are deeply local,” he added, referring to different groups and changing migration patterns as new groups arrive.

Ana Mari Cauce, president of the University of Washington, said: “Diversity matters, not just because it’s a moral imperative but because it is important to access,” particularly for marginalised groups. 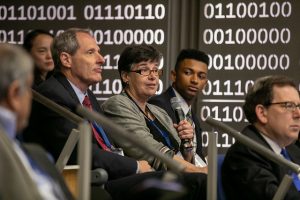 Many studies find that “a diverse group actually comes up with better solutions than homogeneity in the room. And diversity matters for problem-solving and it certainly matters for leadership,” she said.

It was not enough to increase diversity in the pipeline to top university management positions. “You also need leadership,” she said.

Diversity in university leadership “can be very inspirational”, said Cauce, who describes herself as an unrepresented minority as a Latina and lesbian, adding, “I have seen throughout my career that diversity attracts diversity.”

Minority groups often seek out diverse and open environments. “When I look at the students in my lab there’s been a huge over-representation of Latinos, African-American students and LGBTQ students and it hasn’t always been that I have been looking for them but they’re looking for me.”

Diversity has to go hand in hand with equity and inclusion, said Kang, noting that “inclusion is the next step beyond formal diversity”.

“Without inclusion underrepresented groups cannot get to the top of whatever mountain they are trying to climb and that also has implications for universities.”

“Diversity does not guarantee equity or inclusion or vice versa,” Kang told the conference. “If you invite a lot of people in and treat them pretty badly and they bail out, it doesn’t mean that just because you put the numbers in that you also have the numbers staying and flourishing,” he said.

“Sometimes it could be ‘cosmetic compliance’,” he told University World News afterwards.

He added: “Diversity does not answer the question of whether or not men and women are being paid or being accelerated in the same way, and whether they have equal opportunities for leadership – that’s equity.”

The University of Sydney’s Spence said diversity cannot be an add-on, and it is not just about efficient management. “It has to be part of who you are.” 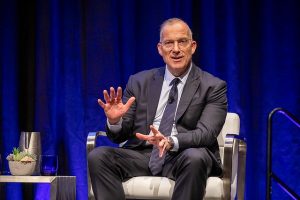 Michael Spence, Vice-Chancellor and Principal, The University of Sydney

No matter how many different groups are added, “it’s a matter for everybody”.

“Yes, we need to remove discrimination but at the end the issues are deeply cultural,” Spence said.

Kang, who is also a professor of law and of Asian-American studies, and has researched implicit racial bias and the law, said universities need to create a common identity that includes all new groups “without obliterating the core identities that we have”.

“The ability to create commonalities and find accidental similarities even though we might be of different races, ages, even languages, allows us to care about each other in different ways,” Kang told the conference.

The commonalities can be around things as mundane as sport, food or music, he added. 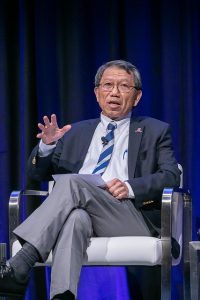 Rocky Tuan, vice-chancellor of the Chinese University of Hong Kong, said if 42 countries are represented on his campus, “you cannot create 42 different environments for the students. Therefore our challenge as university leaders is to create an environment with sufficient diversity to accommodate common elements between different cultures, ethnicities, and so on.”

He said: “It won’t be identical to where they come from because they won’t have learned anything new,” but it will “incorporate key components of that”.

Tuan added that this also depended on understanding students and their backgrounds and culture. “It’s very tough.”

The conference heard several examples of how to improve diversity and inclusion on campuses, including reviewing shortlists of faculty and staff job candidates to monitor if they are diverse enough.

If recruitment panels “can give me a good explanation, I have to sometimes accept that. On the other hand, they don’t like receiving a phone call from me!” Kang said of this monitoring role. It embeds the process with some seriousness “instead of going with their gut feeling”, Kang said.

Kang said of UCLA’s current process for recruitment of faculty, “we have a requirement that people must submit some information that they have done something on equity, diversity and inclusion”, and a separate requirement on such information when faculty members are looking for promotion.

Cauce said at her institution “at least the chairs if not all members of search committees have to go through implicit bias training”.

“I also very much look for diversity in a pool of finalists,” Cauce said. If it ends up being all white and all male, she asks questions. “I might end up saying that’s okay, but at least I’ll delve and push.”

Diversifying the student body in a way that is inclusive can be fraught with pitfalls. “It’s a competition [for parents] to get their children into a limited number of seats and if you help one group you necessarily hurt another group and that’s not fair,” said Kang.

Some say a university should always pick the smartest people because that’s the mission of the university, Kang said. “You might want 85% of people to be the best test-takers because test-takers are important in pushing forward certain boundaries of knowledge but that doesn’t mean that you don’t want 15% of people who have different skills – great oratory skills, emotional intelligence, community skills.”

He described this as having a “portfolio” of skills within the university student body.

The world is going to get more cultural exchange and more diversity, says Cauce. “If we don’t deal with this problem [of diversity and inclusion], we are just facing bigger problems down the line.”

And often it means pushing back against entrenched views and politicisation. She says while speaking to the public, especially in small rural towns in Washington state, she gets questioned about the large numbers of international students on the campus.

“I point out to them that even if their child is never going live more than 100 miles or 200 miles away from where they are at, if they can work at Google or at Amazon or Starbucks or Microsoft, they’re going to be travelling around the world, they are going to be working with a workforce that goes all around the world, and if they’re not culturally competent and they’re not comfortable with people from different places, they’re just not going to be successful.”