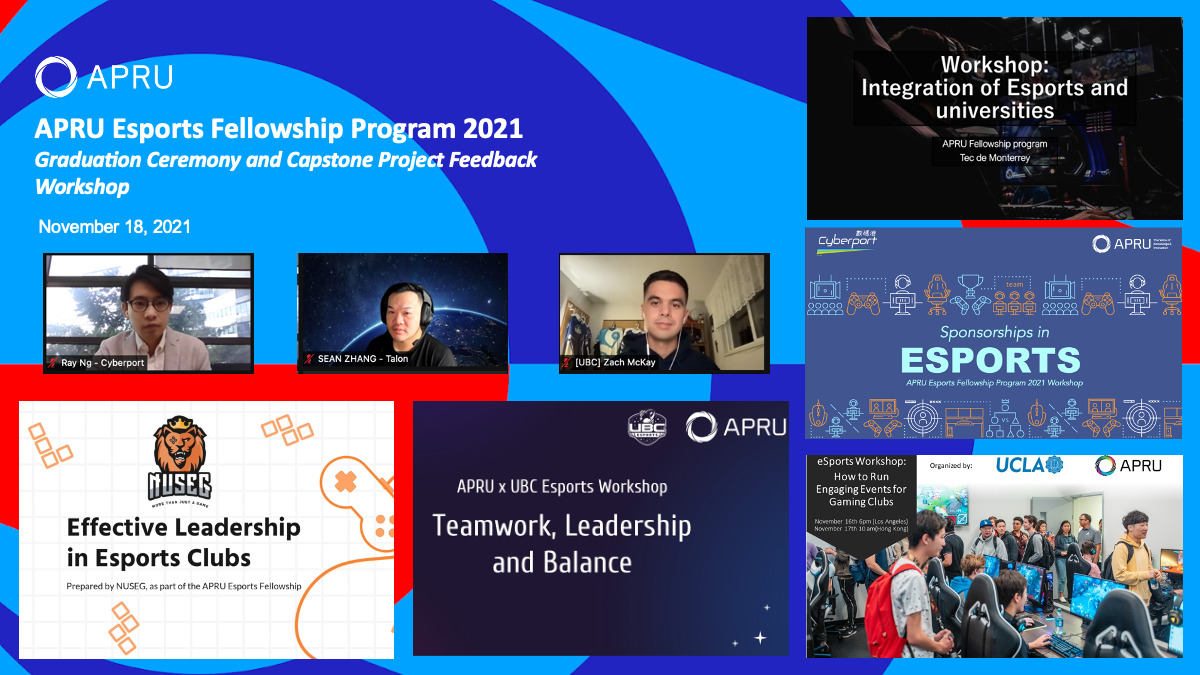 The graduation ceremony of the APRU Esports Fellowship Program 2021 and the feedback workshop of the Capstone Project were held on November 18, 2021, featuring several successful Esports pioneers who encouraged APRU students to pursue careers in this dynamic industry.

Led by Tecnológico de Monterrey university in partnership with Cyberport, Hong Kong’s hub for digital technology, the APRU Esports Fellowship Program is an international network of student leaders who support the growth of vibrant Esports communities.

The Capstone Project, hosted by APRU, involved university-based student teams developing action-oriented strategic growth plans to drive Esports-related initiatives forward at their respective universities. Each team worked with an advisor at their university who guided them through the process of developing the proposed plan.

“During my time as a student, I have been able to gain experiences I could have never imagined and make friends that share my passion,” said Zach McKay, Co-President at UBC Esports Association.

“I was given the unique opportunity to equip myself with tools to work in the Esports industry after university, and I am sure my fellow students here can appreciate and relate to my experiences,” he added.

Similarly, Ray Ng, Esports Manager at Cyberport Hong Kong, explained how he started working as a part-timer in the Esports industry after graduating from university and then secured his first fulltime position after one year. That was not as easy as it seems, Ng emphasized, as he had to endure many ups and downs, with some amazing companies turning him down.

“Despite these setbacks, I continued build up my connections in the industry,” Ng said.

“When you are looking into the mirror, you should always think who you want to become, and then you can go ahead making a difference in the world of gaming and Esports,” he added.

Sean Zhang, CEO and Co-founder at Talon Esports, shared his view that the Esports industry is going to grow quickly to eventually surpass many traditional sports. He pointed out that passion is the most important thing for anyone seeking to pursue a career in Esports.

“The hours are long, there is a lot to do, but if you do your work, it will be incredibly rewarding regardless of where you are, because there are fantastic Esports teams around the world,” he added.

We congratulate the 26 students who graduated from the Esports Fellowship Program 1st Cohort. They represent 5 APRU universities including: