Hong Kong, July 17, 2018 — We are delighted to announce that National Tsing Hua University (NTHU) in Taiwan has joined the Association of Pacific Rim Universities (APRU).

We welcome NTHU President Dr. Hong Hocheng and his colleagues to our association and look forward to a valuable and productive partnership. 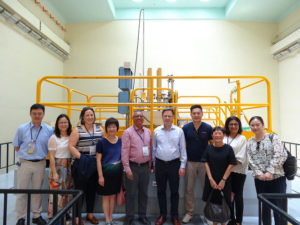 Most recently, an APRU delegation was given a tour of the NTHU campus during the 22nd Annual Presidents’ Meeting in Taipei in June. The campus landmarks visited included the Brain Research Center, Tsing Hua Open Pool Nuclear Reactor (THOR), as well as the NTHU Library.

“APRU is privileged to count NTHU among the leading research universities which comprise our members,” said Tremewan.

“We applaud NTHU’s impressive track record as a university incubator and welcome the strength NTHU will bring to our collaboration on effective solutions to the challenges of the Pacific Rim region,” he added.

NTHU was founded as the Beijing Tsinghua University and re-established in Hsinchu City, some 70 kilometers south of Taipei, after the Chinese Civil War.

It has so far spun off over 100 companies, making it the largest university incubator on the island.

The university is especially renowned for its nuclear faculty, which is home to THOR, one of the world’s two nuclear reactors that are currently being used for clinical studies for neutron capture therapy of cancer.

NTHU’s Brain Research Center has together with the US Cold Spring Harbor Laboratory developed a series of novel imaging tools, allowing an unprecedented 3D visualization of single-gene expression in single neurons within the Drosophila (small fruit fly) brain.

NTHU’s US Patent Acquisition ranking has been 1st in the whole of Taiwan for the past four consecutive years.