Gamers often get a bad rap. Critics argue that online gaming is a time waster, exclusionary and male-dominated, even leading to aggression and addiction. In practice, though, virtual games and tournaments connect people across the globe over shared interests, says Zachary McKay, Co-President of UBC Esports Association, an initiative and club. With the motto “where gamers meet UBC,” it is the university’s largest club with nearly 4,000 members, compared to others which average in the hundreds or dozens.

UBC Esports aims to build a community of students with no borders, and engage with colleagues and peers worldwide through online video game competitions, social events, tournaments, celebrity meet-ups and their crown jewel, the Legion Lounge where students can play games on campus. Not only does the club want to reverse negative perceptions and attract new people from all walks of life, it is investing in its student members. Case in point: the club and the Association of Pacific Rim Universities (APRU) recently awarded scholarships to two UBC students through a research paper competition.

“The competition is about supporting Esports as an academic area of study, and encouraging students to have innovative and quality research in the field, as well as promote long-term investment in Esports research to enrich students’ and universities’ resources in an emerging field,” says Matthew Tan, UBC Athletics and Recreation Associate Director of Partnerships, and Senator at UBC Vancouver Senate and UBC Council of Senates. Tan collaborates regularly with UBC Esports.

At the 2021 APRU Student Esports Paper Competition and Awards, McKay came in first for his piece on Business Models for the Esports Industry, taking home a USD $3,000 scholarship. He is in a fifth and final year at UBC, earning a philosophy degree with a minor in creative writing.

Another undergraduate, Kaden MacKay, also won USD $3,000 for first place in the category Esports for Social Good, “writing about different countries and cultures,” MacKay says. “For example, Pakistan winning the biggest tournament ever held: these success stories show that you can’t judge anyone as an Esports player by where they come from – it’s just so diverse.” A club finance executive, MacKay is in year two at UBC, focusing on cognitive systems.

Both winning papers will be published in the International Journal of Esports. The students plan to use the scholarship money to pay for university tuition and, because he is in his last term, McKay will use $1,000 of his winnings to establish the first UBC Esports leadership award.

UBC Esports is a non-profit, volunteer, student-led organization under the UBC Alma Mater Society umbrella. The club runs as seamlessly as a well-oiled corporate enterprise. And anyone who thinks gamers might be lacking in smarts and motivation need only listen to McKay detail the start-up structure model, workings of its HR department and foundational principles in a manner far more articulate than many CEOs twice his age. Founded 11 years ago, today UBC Esports is internationally recognized – and popular. More than 1,000 entrants have signed up so far for June’s upcoming Smash Tournament “Battle of BC 4,” for example. Members can get involved as much, or as little, as they like, McKay says. The action ranges from laidback and leisurely to competitive tournaments in a high-stakes environment, and no prior experience is necessary. The only agenda is getting people excited about and enjoying video games, trying new things and making friends, he says. Some of the most popular games include League of Legends, Valorant and Super Smash Brothers.

“We are incredibly approachable,” McKay says. “For myself, I’m not very good at games. I do it for the fun of it. What motivates me is that I’ve been able to make lifelong friendships with people through the club. Our community is really vibrant and the social aspect is a unifying feature.”

Busting misconceptions is also part of the club mandate, in particular, leading by example to be diverse, secure and inclusive. Half of the club’s several vice presidents were women in 2021. UBC Esports hosts a women’s night for female-only competitions and boasts a team culture that prioritizes a safe atmosphere for women and marginalized communities. The association also puts on professional development workshops centered on Esports with the goal of preparing students for careers in the video game industry. Topics cover everything from partnerships, project management and event logistics to human resources and graphic design. 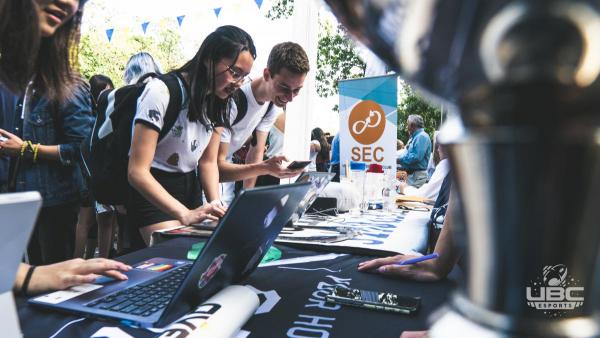 APRU decided to get involved when UBC President and Vice-Chancellor Santa Ono first flagged the opportunity back in 2018. Noting the almost 3 billion gamers worldwide, and 2.5 million college and university students likely involved in esports in APRU alone, President Ono voiced his support for UBC to get involved. UBC then became one of 11 founding partners in the APRU Esports Fellowship Initiative, which brought in consultants to advise on what universities could do collectively and individually. An international Esports fellowship and greater support for the club topped the list of recommendations. Along with UBC, founding members of the initiative are Far Eastern Federal University, Hong Kong University of Science and Technology, Keio University, Nanyang Technological University, National University of Singapore, Tecnológico de Monterrey, University of California, Los Angeles, University of Southern California, University of Washington and Yonsei University.

And the movement is growing. Connecting with others from all over the map is at the core, says MacKay. “How rare is it to talk to someone in Chile and Australia at the same time?” he says. “It’s usually very country- or continent-specific, so it’s so cool to do this globally. Everyone who does this is very passionate about what they think Esports can be – and it’s about sharing ideas across the world.”