The role of universities in an era of heightened migration Universities have an important role to play in protecting and educating students, changing cultural perceptions and informing policy with evidence-based research in an era of heightened migration – particularly in a world where the rights of migrants are coming under threat from populist politicians – university leaders heard at a conference on the issue.

Universities should not take positions “but we can provide data”, said Gene Block, chancellor of the University of California, Los Angeles, which hosted a meeting of some 130 university leaders of the Association of Pacific Rim Universities or APRU. They included around two dozen university presidents and vice-chancellors from Asia and the Pacific, North America, Latin America and China. 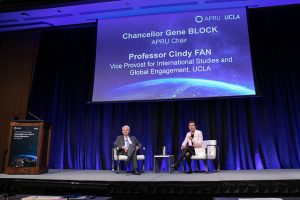 “Accurate information is so important. When you hear in the news that undocumented people in the United States are responsible for a high level of criminal activity, that doesn’t actually comport with the data,” said Block, current APRU chair, at the conference held from 23-25 June under the theme of ‘Universities in an age of global migrations’.

“Even with illegal immigration in the US there are questions of the benefits and the costs and I think an honest discussion of that could better inform voters of the advantages and disadvantages of current policies,” he said.

Many universities have area studies, departments of urban planning, geography, economics and studies of minorities that tackle specific issues surrounding migration. But few have major overarching research centres on migration.

However, he suggested, that could be a controversial move in the current climate. In America, for example, views on immigration have splintered along partisan lines, creating deep political rifts.

“Is this just too poisonous an issue?” Diamond asked in a keynote speech. A multidisciplinary university centre on immigration would not be determining positions but members of the centre would have their own views, which might “raise screams from legislators or trustees or private donors”.

“This is one of the biggest issues in the world today. But if universities won’t touch the issue, is there any other plausible form to take the lead in understanding immigration?” Diamond wondered, arguing that universities were the most plausible option.

On the day-to-day level universities are already dealing with the impacts of immigration policies and need to be better prepared, the conference heard.

“UCLA has some particular obligations. We have a large number of undocumented students and many of those students are now at risk of deportation if they lose their DACA status,” said Block, referring to the Deferred Action for Childhood Arrivals. The DACA programme was created by previous US president Barack Obama through executive action in 2012, to protect young undocumented migrants, mainly from Central America.

“Some of these students are protected for the time being but there’s been discussion in the US administration to remove the protection, so I think we have an immediate responsibility, an operational responsibility that’s tactical – we have to make sure the students can continue to receive an education and graduate, and that’s challenging,” Block said.

UCLA has hundreds of undocumented students, he explained. “It is a very large number of students and they are justifiably nervous about their future.”

“We also have issues of international students who have difficulty or concerns about returning to their countries for fear of not being able to get a visa for re-entry to the US on return,” said Block, referring to US travel bans that mainly affect students and researchers from five Muslim nations, and more recently Chinese students and researchers as US visa policies have tightened due to the ongoing US-China trade war.

As a result of recent changes in immigration policies, Block said that in 2017 he appointed an advisory council – the UCLA Advisory Council on Immigration Policy – which reports directly to the chancellor and provides recommendations based on government policy changes, particularly on the impacts on students, researchers and faculty.

It also provides advice to students, for example on how to respond if approached on campus by immigration officers who are executing a federal immigration order, and has launched crowdsourcing campaigns to raise funds for students at risk.

Ana Mari Cauce, president of the University of Washington, said her institution also had a centre for assisting undocumented students that mainly serves the undergraduate community, but she was looking into extending it to graduate students.

David Garza, president of Tecnológico de Monterrey in Mexico, noted that the country was the world’s second largest source of people migrating to another place and the second largest ‘corridor’ of migration in the world, funnelling people from other countries through its territory to the US and elsewhere. This had an impact on universities.

“We have this influx of Central American migration but not all of them are entering the United States. Many will be staying in our country,” Garza said. 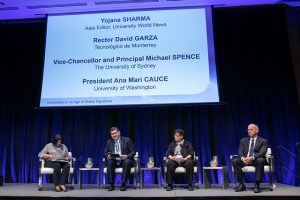 “And it’s not just from Central America. We are also seeing people from different parts of the world using Mexico [as a] corridor.”

For a country that is 95% Catholic, “all of a sudden we have Chinese people, Indian people, and people of different religions”, generating interesting challenges “not just for the university but the city itself”.

“So we are starting to think about what will be our role as a university in this context.” For example, he noted that some academics from other Latin American and Central American countries were looking for job opportunities in Mexico, while students from other countries want to continue their studies in Mexico and need to be accommodated.

However, he told University World News that an expected influx of undocumented students, particularly those of Mexican origin, from the US had not materialised. “As universities we had collectively prepared to receive large numbers, but they did not come,” he said, adding: “I think they have decided to wait and see.” 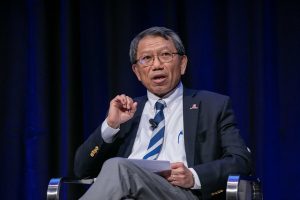 While Hong Kong is historically a city of immigrants, “we do have challenges. Essentially we have three groups of students – Hong Kong Chinese, Mainland Chinese and we also have international students from all parts of the world,” he said.

“We have to try to find different avenues that can link people together, such as music and things of common interest to connect people.”

With ongoing demonstrations in Hong Kong, the cultural difference between Hong Kong and Mainland China is being emphasised. Recent events in Hong Kong, Tuan noted, illustrate how heterogeneity “can blow out of proportion”. But he took a positive view.

“Yes, you can have disagreement, you can have differences of opinion, but it is possible to find situations where you can express these views”, Tuan said, speaking in the wake of huge demonstrations in Hong Kong that reached up to an estimated two million people, but before the storming of the legislature on 1 July.

Even countries that have not had significant immigration are now facing huge changes.

Hideo Ohno, president of Tohoku University in Japan, said that the Japanese government recently changed immigration laws to make it easier to recruit workers from overseas, and workers in some categories can bring their families.

“Japanese society is rapidly transforming into a more multicultural society and social integration is becoming a critical issue for society as a whole.”

While he noted that the number of international students on campus is very small – just 2% of the student body – he said the university mission was to familiarise students with a more globalised world and greater diversity within Japan.

This was echoed by Aiji Tanaka, president of Waseda University in Tokyo. “Japan is a very homogeneous country, but we will have to expose our people to a more heterogeneous culture and society, otherwise Japan cannot survive in the global world,” he said.