The University of Oregon, in Eugene, Oregon, in the United States welcomed 52 undergraduate students from 28 universities based in the Pacific Rim region, including from the US, Canada, Indonesia, China, Japan, Australia and elsewhere. They were participating in the Association of Pacific Rim Universities (APRU) Undergraduate Leaders’ Program, running between 1 July and 12 July.

Over the programme’s 10 days, students explore what leadership means and how they might enhance their home communities with those skills.

After getting to know each other through workshops, such as exploring the concept of designing products, services or systems that retain their human-centred focus, the students were split into small groups to listen to presentations from three Eugene-based community organisations.

The students are to use their new-found skills to try to combat a problem they have been assigned to tackle.

To illustrate environmental degradation, BRING Recycling, a non-profit dedicated to reducing waste, spoke about the percentage of the local waste stream that results from food and construction.

A representative of Lane Education Service District, which supports 16 school districts in Lane County, Oregon, addressed social inequality with a presentation about equalising access to quality education, primarily for students of colour and low-income students.

A representative from HIV Alliance spoke about how to reduce rates of HIV, in particular across rural communities, to highlight a specific public health concern.

The participants have been charged with presenting solutions for evaluation by these community organisations, who will choose their favoured solution.

Next generation of leaders

“We want to help these students build up skills that will hopefully be applicable in whatever field they go into, to help create the next generation of leaders and problem-solvers around the Pacific Rim,” said William Johnson, assistant vice provost for operations and innovations in the UO’s division of global engagement.

“We also want to give them a real-world problem that is both hyper-local to the community they’re coming into and a truly global problem that they might experience in their home communities.”

This is the ninth year APRU has run such a conference. Each year, it assesses proposals from member institutions and chooses a winning university to host the programme.

The UO conference has taken a fresh turn: earlier years of the conference, held at other universities, were less student-led and were instead more focused on bringing students together to experience the university along with training and lectures.

Johnson was proud about how this UO event is approaching problem-solving in this student-centric way.

“It’s gotten less focused on the traditional lecture model over the years of the conference, but there’s nothing approaching this level that we’ve seen in the past,” he told University World News.

“While there are other experiential learning and problem-solving conferences like this around the world, or that address similar types of challenges, we haven’t seen anything quite like this done before and so far, it appears to be very successful.”

Over the course of the programme, participants work with UO faculty leaders in skills-building workshops and guided group time to hone a solution to each of these three problems. A problem such as homelessness, for example, was not considered as a focus because it manifests itself very differently in different societies.

Prior to the conference, the students were divided into three larger groups, based on their educational experience and interests, to tackle one of the three areas of concern. Each of the three disciplines has two faculty members, two graduate students and four upper division UO undergraduate students working with teams of four to five programme participants.

Students have said they are excited about the experiential and interdisciplinary learning that the UO programme offers.

“We don’t always get an opportunity to ask and give our opinion about our thoughts,” said Andrew Prasettya Japri, a third-year public health student from the University of Indonesia.

“Here I feel that everything is two-sided. We can ask questions freely and they always use some kind of technique like games and ice-breaking. It’s very good to wake your brain up and get something like that.”

Interdisciplinary learning is a strength of the University of Oregon – and it was anticipated by organisers that this could challenge some participating students, because many are from cultures where experiential learning is not the norm.

Nevertheless, on the first day of presentations students appeared keen to embrace initial workshops on leadership and human-centred design thinking.

One task was focused on small-group discussions on what leadership means, what type of people exhibit leadership skills and whether the attendees considered themselves leaders.

Hayakawa was assigned to the social inequality group, and she hopes to parlay her experience in Oregon into a greater role in improving women’s leadership in Japan.

“Japan is still a very male-centred society,” she remarked. “I want to give more opportunities for women’s leadership because women still do not have a high position in Japanese society, and it is difficult for women to participate in the workplace.”

This year’s conference organisers intentionally selected challenges with interdisciplinary perspectives. For instance, while some students are focusing on a specific public health problem, the programme has a built-in structure to strongly encourage participants to view that problem through a social inequality or environmental perspective. 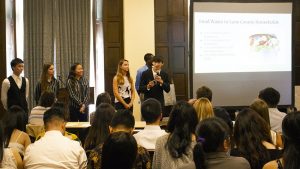 Photo by University of Oregon

At the end of the first week, each group will pair with groups from the other disciplines and they will practice pitch some of their solutions. Each group is tasked with helping other groups understand either the health aspect, the social inequality or the environmental aspect of their problem that they might not be considering.

“It’s a really unique way of thinking about how all of these problems are interlocking,” said Johnson. “That makes sense from an academic perspective, but you don’t always see that approach in real problem-solving.”

By the end of the programme, participants should develop a winning proposal in each discipline that is not just creative and feasible but impacts on the individual problem, along with an interdisciplinary perspective.

Funding or implementing the solution is up to the discretion of the partner organisation. Even if the solutions do not end up being implemented in the real world, participation in the programme will have helped students think about what solutions might work as they return to their home countries and begin their own advocacy work.

This is the first in a series of three weekly articles about this project.