Universities ride eSports wave for a stake in its future Almost below the radar of university leadership, eSports or competitive computer gaming tournaments have been gaining ground on campuses, building followers, audiences and players that attract as many, if not more, fans as traditional sports.

Now university leaders have started to realise the need to get to grips with the new campus phenomenon and get involved in the governance, research and steering of eSports into a new era to the benefit of students and society, and not simply the game industry.

“The eSports phenomenon is evolving very rapidly,” Santa Ono, president of the University of British Columbia (UBC) in Vancouver, Canada, told a meeting last month of university presidents of the Association of Pacific Rim Universities (APRU). “We cannot just be an observer; we have to be a shaper of this industry and others like it.”

The scale and growth of competitive video gaming are dramatic. “It came to my attention because of the passion of a very large group of students of the University of British Columbia,” he told the APRU annual presidents’ meeting on 23-25 June hosted by the University of California, Los Angeles (UCLA), with university heads from Asia, Australia, North America and Latin America. “It is the largest club at UBC.”

Ono cited the example of the 2018 League of Legends World Championship held in South Korea last year. “Entire arenas are filled with your students who get together and travel long distances to participate in eSports,” he said, referring to the multiplayer strategy-oriented battle game which attracted some 99.6 million online viewers around the world last year, double the number of viewers at the NFL (National Football League) Super Bowl.

At a launch meeting in Hong Kong in February this year, universities across the Pacific Rim set up the University eSports International Initiative (UeII) under the aegis of APRU to look at the potential for university collaborations.

Universities have different reasons for getting involved. Some want to set up campus teams and host championships, reaching out to like-minded universities. Others see it as another way to engage with a major, growing industry for research partnerships and, at the student level, making them employable in these industries and other emerging industries of the digital economy by giving them additional skills through competitive gaming.

But others have a much broader vision, seeing the potential of eSports to connect young people as too important to leave it to be dominated by the computer games industry, and to harness the games and their followers for the public good.

This includes, initially, setting up proper rules and regulations for eSports, including the tournaments so that they do not simply enhance the game-makers’ bottom line.

“We need a neutral governing body to design the competition with fairness. The current industry-driven eSports has a problem in that it is governed by the industry’s commercial interests,” says Masa Inakage, professor and dean of the Graduate School of Media Design at Keio University, Japan, one of the UeII founding members.

eSports is more a branding success rather than opening up a new field of gaming. Inakage says: “We do believe it is going to evolve fast and will become bigger and will become a major part of the game industry. But as a research institute we are always looking at the near future rather than today.”

“The governance of eSports for eSport players and competitions is our main concern,” said Kim Yong-Hak, president of Yonsei University, South Korea – the country which APRU Secretary General Christopher Tremewan described as the ‘motherlode of eSports’ and where competitive gaming originated and is most advanced. “The governance of an eSports league, including what would be the ingredients of eSports itself and strategies would be a focus for discussion,” Kim told University World News. “The [game-making] companies themselves want universities to be involved and make suggestions on regulations.”

Universities’ involvement in regulations, for example, can reduce the amount of onscreen violence in game design, and perhaps inject “certain ethical principles for the benefit of society”, including other uses of gaming, and aspects such as game addiction and mental health, Kim said.

A new type of social media

The universities’ approach goes well beyond gaming. As Ono and other university leaders involved in UeII see it, eSports will increasingly become a way for communities to consume information. “In many ways eSports and this platform are the new social media,” Ono said at the June conference, “and it has students at its centre”. 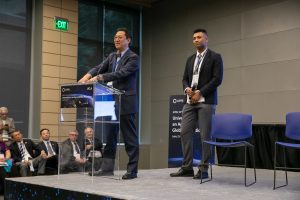 According to Ono, eSports is directly relevant to creating global citizens and leaders and to the digital economy. But eSports could also be part of the universities’ focus on global challenges like global warming, ageing or health.

“So whether it’s through studying human-computer interaction, or how technology will augment our physical and cognitive capabilities, or how we can gamify cities to make them more playful, more engaging, more interactive, it becomes an important medium for universities to engage with.”

“And frankly, without universities engaging in emerging industries that have so much potential to impact society, I worry about the trajectory of these industries,” Frenz said, citing the example of Facebook, which was already present on over 2,600 university campuses in 2006-07 before it became the global behemoth it is today.

Facebook “was right under universities’ noses, so it’s worth thinking about what the world would look like today if universities had collectively, meaningfully engaged in that industry back then”, said Frenz.

The importance of eSports research

“We are developing courses right now to develop eSports as a means to teach the Korean language and another [course] to teach [students] about the Sustainable Development Goals, so it’s a public good kind of approach,” Kim says, that will use the storytelling, designing and marketing of eSports for other purposes.

Yonsei University would set up a formal research group to collaborate with APRU and other universities, Kim said. “Some eSports are really violent, sometimes they destroy humanity, so we would look at the good side of eSports that can be used to enhance humans intellectually.”

As a professor of sociology, Kim also pointed to possible research into sociological issues such as how different cultures play the same game. “This research topic will be fascinating as gaming or eSports is a very strategic activity, and culture has an influence in playing a game,” he said. For example, “Japanese players do not kill other people, but in the same game Koreans will kill other people. Research into this will be very beneficial for society.”

Kim says Yonsei University will open up a new eSports department next semester. “Because we are already strong in many disciplines in eSports-related technologies such as virtual reality, augmented reality and 5G – related in a latent way to eSports – we wanted to do interdisciplinary research and teach our students within the discipline of eSports-related technologies.”

Research is also a main focus at Keio University in Japan, looking at taking eSports into new, innovative directions. “To us it is more about advancing and redefining what sports might mean, and what technology and computer games narratives can be added to sports,” Inakage said.

“At Keio we’re co-designing multiple types of invented sports which require physical movement of the entire body. We’re trying to stretch the definition of eSports beyond gaming to sports that require people to physically move while playing games and enjoying the excitement of the gaming as well.”

This will benefit ageing societies, he said, using eSports to increase activity levels and longevity. “Whether it’s going to be called eSports is another issue,” he said, noting that the gaming industry has hijacked the term.

He also believes new sports can be devised that will rely on advanced technology. “We have a group of people working on superhuman sports,” he said, using the Harry Potter game of Quidditch, flying through the air, as an example of this.

“We are testing our invented sports within the university environment,” he said, noting that UeII will be important for developments in this area of ‘superhuman sports’.

Arnaud Dione, who heads the UBC eSports Association – which with several hundred members is the largest club on the UBC campus – believes research and innovation in this field will depend on campus eSports.

“To harness that interest and the benefits of video games you need a strong eSports presence on the university campus because I believe eSports brings out the best in video games. You can get a lot of skills playing these games competitively.”

In one-to-one games, there is a lot of psychology involved in knowing what your opponent is going to do, says Dione. Team games such as League of Legends depend on team synergy. In a competitive environment, players have to stay focused when they have a crowd cheering for or against them. “You need mental maturity and stability,” he says.

“It’s really growing in skill, and what I’d like to make sure is that it is also growing in quality,” says Dione.

“The promise of social media was to bring people together. And while we are connected, I don’t think it has really replaced those community values. eSports can and will help rebuild those connections,” Dione believes.

Dione says university leadership needs to get behind eSports and not just to improve sponsorship and scholarship opportunities for tournaments and players. “We need to remember that we need to use this global phenomenon for good, to grow this industry in the right direction, into one that includes everyone, no matter who they are or how good they are at a certain game.”

As UBC’s Ono says: “This is the moment and the window will close at some point. This is our opportunity as a network of universities to shape the community.”