APRU on UWN: Long way to go for parity for women in HE leadership It also includes international analyses of women’s leadership in higher education by Fanny M Cheung and Joanna Regulska, as well as a section on the diverse dimensions of gender equality, including contributions on the subjects of leadership at women’s colleges (Kristen A Renn) and black women and intersectionality in US higher education (Ashley Gray), as well as a personal reflection on women’s leadership by Lily S Hsu.

The brief argues that, while overall access of women to higher education as students has risen in some but not all regions (sometimes achieving more than parity), this development is not uniform and is by and large not paralleled in positions of either leadership and decision-making or at the highest levels of institutional administration. 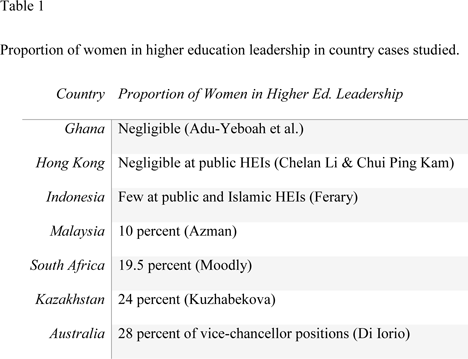 Although the barriers and support related to the achievement of women leaders in higher education vary by social and historical context, there are nonetheless certain identifiable commonalities across the country cases examined that make clear the unfinished nature of the project of achieving gender equality in women’s leadership in higher education.

The unfinished nature of the achievement of the human right of gender equality, in terms of representation of women in leadership in general and in higher education in particular, may be understood as partial at three levels in relation to: (i) national or regional context; (ii) historical effects and socio-cultural foundations; and (iii) individuals and the complexity of individual identity, including marginalisation factors.

For instance, the general paucity of women in leadership in higher education is visible even in some countries where representation of women in the pipeline (on undergraduate and graduate degree programmes) is reaching parity.

This phenomenon varies by regional and national context, by institutional type (for instance, by university ranking and classification) and by societal culture, tradition and the related expectations of women.

Intersectionality also determines outcomes, as other markers of marginalisation further restrict representation and participation for women in positions of higher education leadership.

Barriers to equality in leadership

Barriers to achieving gender equality in higher education leadership occur at each of three levels – national or institutional, cultural and individual. As such, effective support and structural change must be responsive to and present at each of these three levels.

According to the cases in the brief, we see that when support is lacking at one of these levels, the overall project for achieving gender equality in higher education seems to stagnate or fails to materialise.

Barriers that occur in society also occur within the system of higher education, since higher education institutions may be understood as what Adéle Moodly calls “microcosms of the broader society”, and so are pervaded by historical and cultural aspects embedded within our communities.

While we are unable to address every cause of gender imbalance in leadership, the academic community is not powerless. The so-called glass ceiling is maintained at least in part through structural and cultural complacency within our institutions and our academic communities.

Through our support for change within our institutions, we work slowly but surely towards social change for the common good in our societies and larger communities.

Both institutionally and societally, barriers include the evident gender pay gap, gendered stereotypes with regard to leadership competency, sexual harassment within the realms of both higher education and society, the leaky pipeline through the fraught pathway of the professoriate, tokenism, hiring biases and the inevitable consequences on the potential for gender equality in the future due to the present under-representation in leadership and decision-making positions.

The precarity of the gains made in gender equality is palpable in the exacerbation of these trends and barriers during the COVID-19 pandemic. For instance, the persistence of gender inequality in relation to domestic labour and family care is discernible in the decline in academic manuscripts submitted by women during the pandemic period.

The idea of the ‘glass cliff’ – a concept describing how women are overrepresented in leadership during periods of institutional crisis – suggests that taking on precarious leadership positions may ultimately discourage other women from pursuing advancement to academic leadership in the future.

Effective support must therefore also address barriers at the three levels of nation or institution, culture and individual.

Institutional policies are necessary in order to ensure procedural justice, for instance, around parental leave, workload expectations, recruitment and hiring and promotion practices.

At an individual level, targeted programming for leadership development and other forms of mentorship programming have been put into place in several countries.

However, it is not sufficient to merely support individual women in the navigation of the structures within which they find themselves. Structural injustice must be met by procedural justice through national- and institutional-level policy.

Cultural changes can also begin within institutions, for example, through institutional policy changes championed by vocal leadership. Universities have the potential to exist as countercultural spaces – as Renn’s contribution on women’s colleges and universities demonstrates – in which justice can be achieved via a cultural change in our approach to women in leadership in higher education.

Support and encouragement for individual women to achieve their career goals can be productive but are generally most useful when accompanied by institutional and national leadership and programming. Indeed, as Regulska asserts in this brief, ensuring that the human right of gender equality is met will require both individual and collective action.

In the end, all of the contributions to the brief imply that the most significant barrier to women’s equality in higher education is a tenacious complacency within our academic communities.

We have the tools in hand that are required to effect initial change. What is needed now is the will to work towards achieving true gender equality within our academic communities and our institutions, with the hope that these steps will also build towards the achievement of this human right beyond our universities, in our nations and across the globe.