APRU’s Senior International Leaders’ Week 2021, hosted virtually October 19-21 by The University of Sydney, highlighted many ways to strengthen APRU’s network’s activities based on what members have learned from the current crisis.

Addressing nearly 100 delegates coming from around 43 universities, welcome remarks were given by Professor Mark Scott, the University of Sydney’s new Vice-Chancellor and President.

Scott pointed out that the Covid-19 pandemic made the future arrive much earlier than what had been expected, with many new issues needing to be tackled with today as opposed to in the next decade. He praised Australia’s international student community for staying the course when the pandemic forced universities to shift to remote teaching dramatically fast.

“We need to create environments where we can catalyse and stimulate research partnerships that then shape public policy and drive innovation,” Scott said. 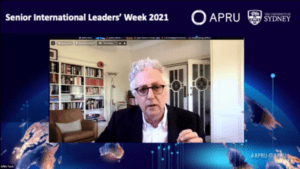 New South Wales Scientist of the Year, Professor Eddie Holmes from USYD’s School of Life and Environmental Sciences, Faculty of Science, in his keynote speech “Lessons from COVID-19 in the New Pandemic Age” explained the need for a broader set of pandemic plans as opposed to the current plans that are based on the influenza response.

It is crucial, Holmes said, that research funding for cross-protection vaccines and antivirals will be drastically increased and that a global surveillance mechanism for the human-animal interface is created; this mechanism would cover a wide range of fields, such as wildlife trade farms and animal markets. 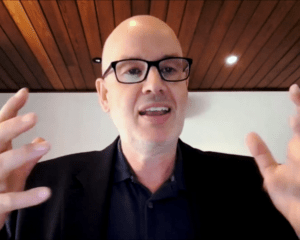 “We need a global pandemic radar that allows us to quickly identify new viruses and respond to the developments,” Holmes remarked.

Christopher Tremewan, APRU’s Secretary General, for his part, highlighted some key developments in the APRU network.

According to Tremewan, a report on the research relationship between China and the United States is expected to be completed later this year. He also reported on former New Zealand Prime Minister Helen Clark in September briefing the APRU Steering Committee on the global plan for preventing the next pandemic. 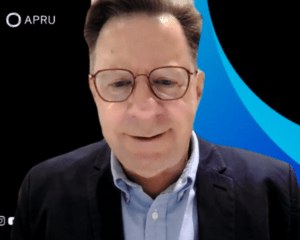 This will feed into a report by the Steering Committee’s Presidential Working Group – comprised of the presidents of The Chinese University of Hong Kong (CUHK), Chulalongkorn University, The University of Auckland and The University of British Columbia – that will recommend what actions the network should take, Tremewan explained. And, APRU’s high-level policy dialogue on climate change is expected to facilitate new activities in the first part of 2022.

“The Senior International Leaders’ Week is a very important meeting because, in these difficult times, it is vital that we keep in touch with each other and continue to build trust and cooperation to understand what each of us is going through,” Tremewan said.

The breakout room discussions on Day 1 and 2 aligned with the three post-pandemic priority areas set out by the APRU Steering Committee: providing a neutral platform for policy development; advancing action on climate change; and enhancing social well-being. 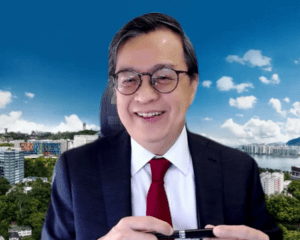 This year’s SIL Week also served as the stage for the celebration of the first cohort of the Asia Pacific Women in Leadership (APWiL) Mentoring Program. This pilot Mentoring Program was launched almost exactly a year earlier, having since matched dozens of mentors and mentees to provide international and intercultural opportunities for the development of aspiring women leaders within the network.

“It’s really important that we come together at this time to celebrate the accomplishments of 50 mentors and mentees from across Asia Pacific, because it showcases our commitment to work together in a world that is becoming increasingly fractious,” said Professor Dawn Freshwater, The University of Auckland’s Vice-Chancellor, in her keynote speech for the Mentoring Program Inaugural Graduation Ceremony. “During the year, you created sustained commitment to ensure that woman leaders have a path to higher education’s future and showed that this program is about doing, not just about talking,” she added.

Participants used the event to report on the impact of the program to the APRU community and introduce the incoming cohort. The APWiL Program is led by the Hong Kong University of Science and Technology, UC Davis, the APWiL Core Group, and the APRU Secretariat.