Speaking at the Asia-Pacific Universities Presidents’ Roundtable held Oct 18-19 under the theme “Education in the Asia-Pacific: Looking back, looking ahead” at Far Eastern Federal University in Vladivostok, Russia, Tremewan cited studies showing that humanity has crossed many thresholds of irreversible climate change and is suffering the early effects right now.

One of these studies, a recent analysis by the Climate Accountability Institute in the US, found that just twenty fossil fuel companies can be linked to more than one-third of all greenhouses gas emissions in the modern era.

Tremewan explained that universities are at the same time distracted from the urgent global issues by the continuous an increasing pressure to prove their performance according to external measures, such as rankings defining the term “world-class.”

“Although the challenges seem overwhelming, universities must demonstrate their commitment to the public good by being externally engaged with solving global issues,” Tremewan said.

“In an era when elites are already selecting the winners and losers of climate change, universities must act together to make a significant difference,” he added.

Tremewan went on outlining some of APRU’s collaborative programs addressing the key challenges, including Shaping Higher Education in the Asia-Pacific; Creating Global Student Leaders; Sustainable Cities and Landscape; and Asia-Pacific Women in Leadership. 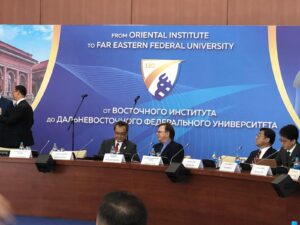 He also took the opportunity to highlight the forthcoming massive open online course (MOOC) Bending the Curve: Climate Change Solutions program by the University of California System, which aims to have thousands of students around the region study ways of keeping Earth’s temperature below two degrees, so that they will be equipped to act in their own situations.

Participants at the roundtable discussed historical pathways and current strategies of APEC universities, contributing to the social and economic prosperity of the region.

They also shared their views on how the landscape of international higher education will look like a generation from now and how its role and position will be shaped.

Key topics were the historic perspective of universities as platform for social change; universities’ response to global change and shift to knowledge-intensive economy; the future of Asia-Pacific education space in the context of sustainable development; as well as challenges and opportunities for universities of the 21st century.