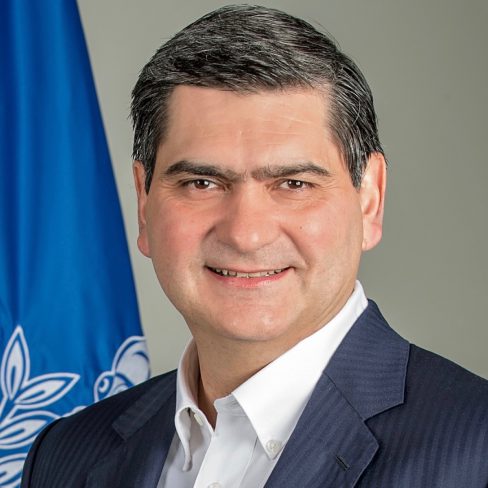 He has a trajectory of more than 30 years with Tecnológico de Monterrey where he has served in different academic and leadership positions such as Director of Graduate Programs, Dean of Division, Dean of the School of Engineering (Monterrey campus), Director of Campus (San Luis Potosí campus), Regional Rector –responsible of the academic operations of Monterrey Campus (main campus)-, Vice Provost for Undergraduate Education -he led key academic initiatives related to improving the quality of students, faculty and the development of Tec21 Educational Model- and Vice Provost for Academic Affairs. He is Rector of Tecnológico de Monterrey since July 1st, 2017, a private nonprofit comprehensive university with 26 campuses in México and nearly 90,000 students (55,500 undergraduate, 8,000 graduate and 26,000 senior high school). It is international recognized for its strong reputation among employers and its entrepreneurial orientation, and it is consistently ranked among the Top universities in Latin America.

Dr. Garza has been a professor/researcher at the Informatics Research Center collaborating with academic departments, and teaching courses in the Electronic and Information Technologies related majors. He has participated as professor in the Masters and Ph.D. programs. As a researcher, he has participated in the definition and development of projects financed by highly prestigious institutions both national and international, such as: United States Agency for International Development, Lawrence Livermore National Laboratories, Advanced Research Projects Agency, European Commission and CONACYT. Some of his research projects have been in collaboration with international institutions such as: Virginia Tech, Southwest Research Institute and Colorado State University. As a faculty member he has been author of multiple journal/conference and book articles, and worked as consultant in different industry projects. He has been recipient, twice, of the Distinguished Faculty Award.

David Garza has been Chair of the Global Engineering Deans Council (GEDC), an initiative created with the support of ASEE and International Federation of Engineering Education Societies. He received an Honoris Causa Doctorate from Universidad Americana Nicaragua in 2012. He is a member of professional societies and organizations such as: ASEE, IEEE, ACM, Sigma Xi, and Phi Kappa Phi. He has served in different conference committees, and state, national and international councils from different industry and academic organizations and has been invited speaker/panelist in international events in more than 15 different countries. He is married with Claudia García Valadez and has four children: Claudia Marcela, Alejandro Daniel, Andrés Fernando and Sara Elisa.