The 2nd meeting of the APRU-Google project, “AI for Everyone: Benefiting from and Building Trust in the Technology,” in collaboration with Keio University and HKUST Big Data Institute (BDI), was concluded on September 1 at HKUST. Co-chaired by AI-experts professors Jiro Kokuryo (Keio) and Toby Walsh (UNSW Sydney), the review of twelve AI-related working papers, focusing on technology awareness, access, governance, and development, was the focal point of discussions at the two-day event.

Themed “AI4Every1,” the project workshop was intended to engage a wider audience in the in-depth discussions on issues of AI. The project participants actively discussed how to establish trust in technology and amplify human intelligence on the use of AI to beneficial ends. 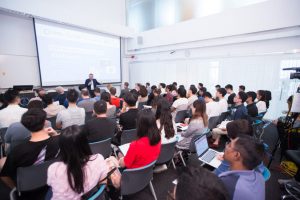 “Everyone wants to get into AI these days. Undoubtedly, AI will change people’s life. It’s really glad to see so many experts from this project coming to HKUST to share with us the applications and impacts of AI to our society,” said Professor Tim Cheng on August 31, Day1 of the event. More than 70 participants, including HKUST faculties and postgraduate students, were in attendance, exchanging AI-related insights with experts and scholars from across the Pacific Rim. 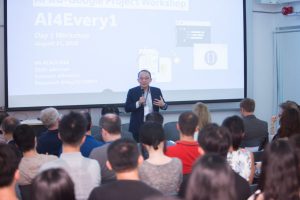 In his welcoming remarks, Professor Jiro Kokuryo reinstated the importance of bridging the gap between technology and society. “The technology is changing very quickly, so people will probably need to be mindful and aware,” said Prof Jiro. “We will try very hard to continue organizing great research.”

Titled, AI and Ethics, Professor Toby Walsh’s keynote address highlighted some of the ethical challenges and lessons learned from recent AI-related controversies and developments that many of the global tech giants were embroiled in. To further the conversation on AI and ethics, Director of HKUST Center for AI Research (CAIRE), Professor Pascale Fung, led a Q & A session, answering questions posed by the audience, in addition to sharing of her thoughts on AI development ethics and governance issues. 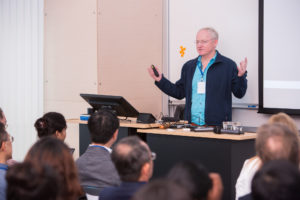 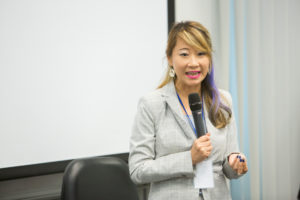 As the Associate Director of BDI, Professor Yang Wang, along with Professor Jiro Kokuryo initiated the topic of AI’s impact on society. The overview presentation on project members’ policy paper—its key messages and future ideas—informed the audience on the latest trends in AI development and governance.

In the closing remarks of Day 1, Professor Dit-Yan Yeung, Acting Head & Professor, Department of Computer Science and Engineering of HKUST, emphasized on the necessity of innovative thinking, because it was important to the development of cutting-edge technologies like AI.

AI, the new frontier technology divide, should be the primary concern for the Asia-Pacific region. APRU’s Digital Economy program estimates that, by 2020, 20 billion devices will be connected to each other and the size of the digital economy in 2025 will be worth $37 billion.