Despite Typhoon Hagibis threatening over the horizon, the 10th APRU Population Aging Conference Hosted by Keio University at their Mita Campus in Tokyo on October 14, 2019, continued to persist.

With over 100 participants from across the Asia-Pacific and beyond a lively discussion including leaders from the World Health Organization (WHO), Ministry of Education, Culture, Sports, Science and Technology (MEXT) and Ministry of Health, Labour and Welfare (MHLW) supported the conference.

The original two-day program was shortened to a one-day event in light of the landfall of Super Typhoon Hagibis in Japan before the conference took place. The amended event focused on presentations and poster sessions by early career researchers and keynote lectures, and a panel discussion joined by the health ministers from Western Pacific countries, including the Republic of Fiji, New Caledonia, and the Republic of the Marshall Islands.

Japan is the world’s most rapidly aging country, with about 30% of the population set to be made up of persons aged 65 years or older by 2025. In addition, aging societies are a burgeoning concern worldwide, especially true to many countries in the Asia-Pacific region. The iconic image featured on the conference’s banner was applied from Hokusai’s ukiyo-e, known as The Great Wave or “Under the Wave off Kanagawa,” juxtaposes the efforts of a tiny boat conquering the gigantic wave with the various initiatives to address an aging society has already been undertaken in Japan. Hence, there is an urge to create a sustainable super-aging society. The latest research outcomes in a variety of disciplines, such as medicine, economics, sociology, and psychology, were presented and shared among the participants, accompanied with informative case studies.

During an open session with engagement with participants, the final panel titled, “Dialogue with Political Leaders,” an important comment was made by a student from the floor pointing out that persons of the younger generation make-up a smaller percentage of the population and will continue to do so in the future. Given this trend, younger generations are confronted with the realities and responsibilities of an aging society, despite the fact that they are not being sufficiently included or participating in public policymaking on aging issues.

In-depth discussions with future leaders along with further promotion of interdisciplinary studies among universities must increase to enhance society’s fortitude in the midst of the great waves of an aging societies.

The conference closed with an announcement that the 11th APRU Population Aging Conference will be hosted by the University of Indonesia in 2020. 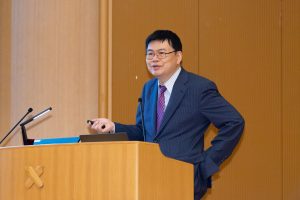 Keynote Address by Prof. Hideyuki Okano, Chairperson of the Conference and the Dean of the Keio University Graduate School of Medicine 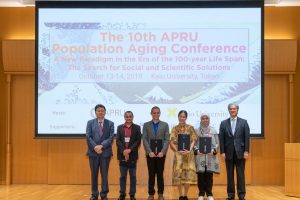 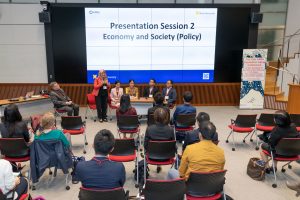 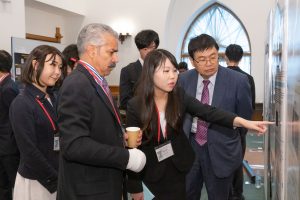 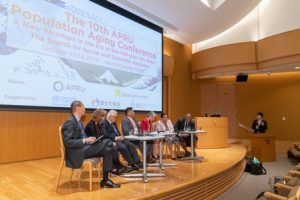 Keio students’ participation at the Dialogue with Political Leaders