Biodiversity Genomics in the Pacific Rim: Challenges and Future Opportunities

Pacific Rim nations harbour a substantial proportion of the Earth’s nine million species, including several biodiversity hotspots. Genome analysis is now recognised as a fundamental tool in understanding this incredible biodiversity and assisting with its preservation. Although genome sequencing at scale is becoming more affordable, significant challenges remain in achieving the goal of sequencing all known species and deriving useful biological information from these data.

The symposium marks the launch of the Association of Pacific Rim Universities (APRU) Biodiversity Program, which seeks to enhance cooperation and synergies among its members in the field of biodiversity and related sciences. This inaugural event brings together leading genomics experts from Pacific Rim nations to discuss progress in this area, the challenges they face, and how collective action can advance biodiversity genomics in the region.

This webinar will be beneficial to academics and industry partners, we welcome the participation of all students and staff alike. 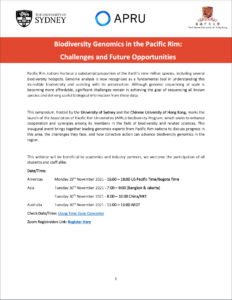